AV training from Africa to Europe with LAFAAAC

Since its creation in 2017, LAFAAAC (L’Académie Franco-Anglophone des Arts Audiovisuels et du Cinéma (French/English-speaking Academy of Audiovisual and Cinematic Arts)) has been reshaping vocational training in the audiovisual and cinematic professions to reach, support and empower more learners both in the developed and developing worlds. More generally, the LAFAAAC mission focuses on improving the expertise of professionals and the organisation of the audiovisual industry, especially in Africa. To meet the training needs of this continent, where the move to digital is in full swing, LAFAAAC offers a disruptive approach, firstly by proposing an innovative training offer that can be accessed anywhere and anytime, and secondly by placing individuals, their skills and concrete practices right back at the centre of the learning process. An original project beyond conventional professional and geographical boundaries

LAFAAAC was founded after a meeting between Olivier Pascal (CEO), François Catala (Director of Learning and Institutional Relations) and Julien Bœuf (Director of Content & Partnerships), who wanted to both fill the training gap in the audiovisual sector in Africa, and provide a disruptive and inclusive offer based on online experience. The company aims to offer online training courses for all technical and artistic roles involved in producing any kind of audiovisual work (from writing to post-production, through to make-up and lighting).

LAFAAAC is distinctive because it’s targeting not only the training needs of an entire sector, but also a market that will develop in an unusual South-North direction, in other words, starting with French- and English-speaking Africa, and then expanding to other developing countries as well as Western ones. The scope of the project is vast compared to most conventional universities, which more typically target particular professions or employees in a given a company.

A broad market, with a wide variety of learners

The populations aimed at the African market are highly fragmented but can be easily reached through an online offer. The geographical target is broad as it includes French-speaking and English-speaking sub-Saharan Africa, from Senegal to Kenya, via Nigeria and Rwanda! The project will start in Benin in 2019, as part of the launch of the smart city Sèmè City. LAFAAAC estimates that there at least 2 million potential learners in the region, almost half of them in Nigeria alone. Obtaining reliable figures on the number of professionals on the continent is not straightforward, however, as they often are involved in several activities on an informal basis.

Developed countries also contain a wide variety of different profiles. In the French market alone, LAFAAAC is targeting more than 300,000 learners. They belong to both the public and private sectors, some are freelance with intermittent contract work in the entertainment industry, while others are employees of large integrated groups (television channels, public broadcasting organisations which employ more than 20,000 people, and companies in the cinema business such as Pathé, Gaumont, etc.).

Needs are therefore hugely diverse. “Some people may be interested in professional retraining, for example a cabinetmaker or electrician who wants to work as a stage designer for a TV show or as an electrician on a set. And for others who are more traditionally trained, they’re keen to learn about the skills and basic knowledge required for a given profession, or they may want to develop those much talked-about “soft skills” and behavioural attributes that are so important in an industry where interpersonal relations are key. We therefore have to offer a wide range of job-related, technical and corporate learning programs to cover initial and ongoing training needs that will improve learner skills and job flexibility,” explains François Catala. The courses are clearly aimed at improving the employability of learners and making them operational on the labour market in the shortest time possible. Consumption of audiovisual content is high in Africa, but the volume of high-quality local production is still relatively limited, although already hugely successful. This makes for huge interest in jobs in the film, production and storytelling industries. These needs are further increased by the widespread transition to digital terrestrial television (DTT) and the desire of African populations and public authorities to create their own audiovisual landscape. However, the training offer for jobs in these industries is fragmentary, often incomplete (in terms of content or geographical coverage), and not yet fully available in online formats.

Mobile learning to overcome the constraints of the African market

The only way to address the African market is via mobile learning as smartphone ownership is very high but the popularity of PCs remains relatively limited. Learning content should also be accessible offline so that learners can continue to study outside urban centres.

Mobile learning was therefore a natural choice for the LAFAAAC team. After benchmarking different players in the sector, they approached Arthur Choukroun, founder and trainer at Skillsday (whose mobile learning partner is Teach on Mars), to deploy its training course in a blended format via their app. According to François Catala, “Skillsday offered us very useful support when designing our pilots, genuine kindness and real added value in terms of instructional engineering. The Teach on Mars solution, which Skillsday makes wide use of, offers a pleasing and user-friendly experience. It’s perfectly adapted to the African market.”

LAFAAAC combines mobile learning with tutorials, virtual classes and online coaching, but also includes face-to-face practical workshops, in keeping with the principles of the flipped classroom. “Theory, contextualization of knowledge and job-specific training are all delivered online, so that learners can go at their own pace and decide where and when they want to learn on their mobile device. The theory can be accompanied by practical exercises that are done independently but under supervision, mostly in virtual classes. The face-to-face sessions are exclusively devoted to professional skills and putting them into practice in a group setting with a trainer,” explains François Catala.

Designing the offer has involved the creation of new and influential partnerships. The first is based on a strong connection with one of France’s major players in training in the media, attracted by the international credentials and agility of LAFAAAC. Another important partnership involves the design of a global platform for audiovisual professions which is interconnected with Teach on Mars and will carry all of the LAFAAAC learning offer and be co-developed with a school known for its web and digital expertise. Finally, “we are of course developing local partnerships in Africa, with professionals, broadcasters and existing organisations to expand our face-to-face offering, mainly through training of trainers“.

LAFAAAC has designed a pilot learning program on film make-up. It includes theoretical explanations, videos illustrating professional practice, and gamification and appropriation activities. The end result is a high-quality course. According to François, “use of different media such as video, sound, computer graphics, motion design and text will grab the attention of learners and keep them engaged.” Teach on Mars has an inherent “virtuous constraint” in the words of François Catala. “You have to be sufficiently short and snappy to stay within the constraints of the card format. Yes, it’s restrictive but it forces you to be precise and use words sparingly to convey the key messages and meet the learning goal. So in the end it’s virtuous for both learners and instructional engineers.”

A promising start, with good prospects for future development

The young company completed a first funding round in early 2018 and is aiming to raise more substantial capital in late 2018 / early 2019. It was recently awarded a contract from an African government to deliver around twenty training courses by the spring of 2019, and expressions of interest have been received from several French- and English-speaking countries. It plans to expand its training offer with many other courses on the audiovisual professions and to continue closely adapting these courses to learner needs.

Editorial note: the Martians wish the LAFAAAC team the best of luck with their ambitious project and hope it proves a stellar success! 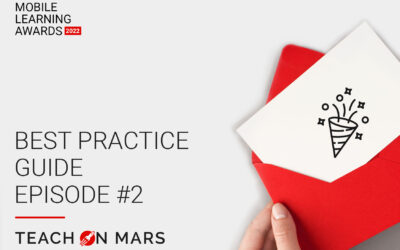 To offer your learners an immersive experience, there’s no need for costly technology (VR headsets, etc.). A generous helping of creativity and meticulous pedagogical engineering will suffice! Valmont proved this with their “Spa Treatments Course – Expert Level” – prize-winner at the Mobile Learning Awards 2022, which propels trainees into the Spa universe and teaches them the gestures that go along with it. All aboard for a journey to the land of wellness!

On the lookout for best practices and inspiration for creating training content? We went over the Mobile Learning Awards 2022 winning course, “Data protection at Klépierre”, with a fine-toothed comb. Check out the roundup of the keys to success which propelled this course into the Learning Technologies Awards 2022!

In this file dedicated to the pharmaceutical industry, we share with you best practices in training, recruitment and engagement, summarizing the actions taken by our clients in the sector.
Find the 3 episodes to be published in the last quarter of 2022!